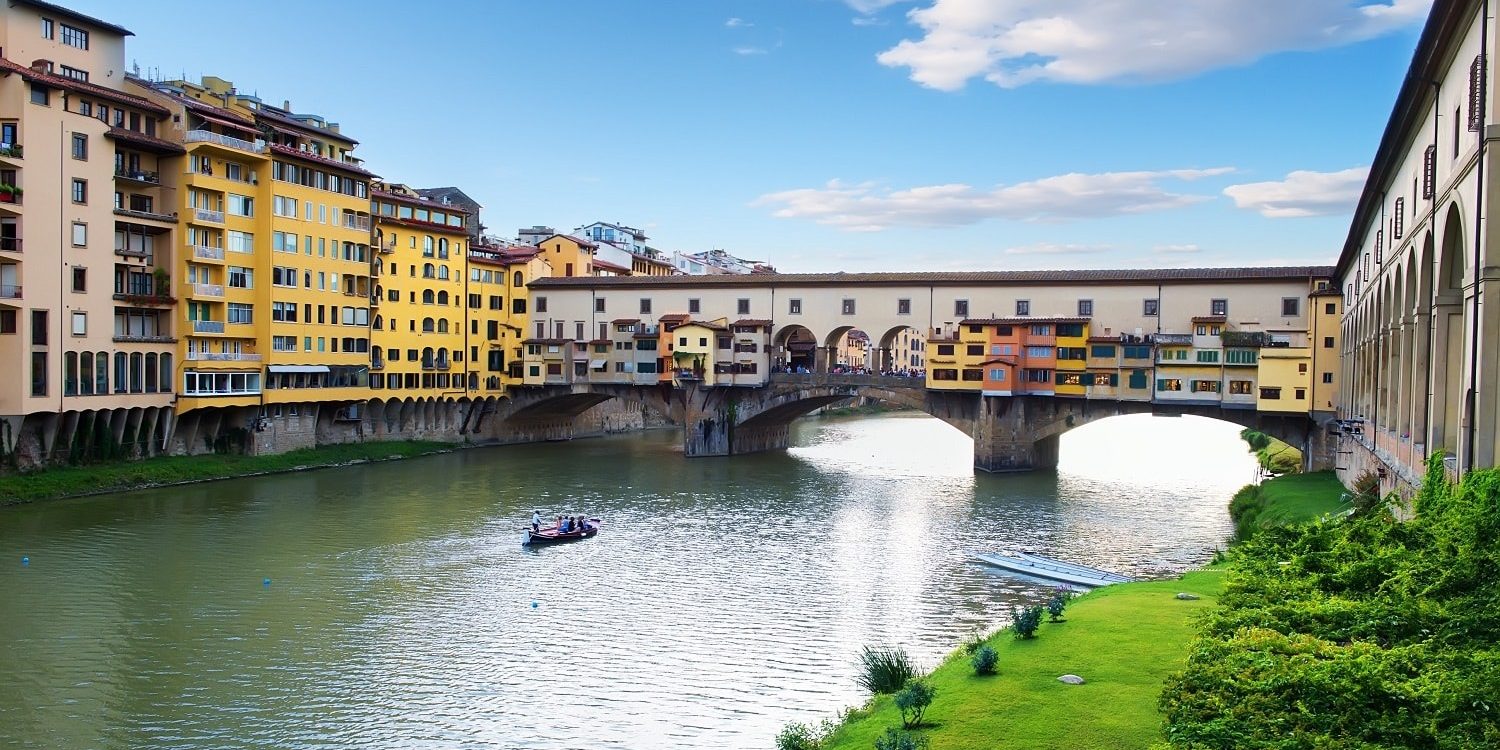 The fascinating Old Bridge, crossing past and present in Florence

The Old Bridge (Ponte Vecchio), is a medieval stone arch bridge over the Arno River in Florence. This bridge is famous for still having shops built along it, as it happened in the past.

At its origins the shops were occupied by butchers but the present owners are mostly jewelers and art dealers. The other bridges close to the Old Bridge are the Ponte alle Grazie and the Ponte Santa Trinita.

The history of the Old Bridge

The first appearance of the Old Bridge in the documents dates back to 996 AD, even if it’s believed that before it there was another bridge built in Roman times.

The Old Bridge crosses the Arno river at its narrowest point, in the same area where there was the Roman Via Cassia. At its origins the Roman piers were of stone and the superstructure of wood.

In 1117 the Old Bridge was destroyed by a flood and then reconstructed in stone, but in 1333 the two central piers swept away and Florentines rebuilt the bridge only twelve years later in 1345.

Giorgio Vasari, the Florentine artist and historian, recorded the design of the Old Bridge as we see it today to the artist Taddeo Gaddi, who has been one of the most important Florentine artists and member of Giotto’s workshop.

According to modern historians, the architect who designed the Old Bridge was Neri di Fioravanti, who worked and lived in Florence in the fourteenth century.

On August 4 1944 the Old Bridge risked to be destroyed once again by the retreat of the Germans, but fortunately it was spared (unlike all other bridges in Florence).

However they destroyed the buildings at both ends so the access to the Old Bridge was obstructed. They reconstructed then the buildings using a combination of original and modern design.

The structure of the Old Bridge

The Old Bridge, a stone closed-spandrel segmental arch bridge, consisting of three segmental arches: the main one has a span of 30 meters (98 feet) and the two side arches each span 27 meters (89 feet). The rise of the arches is between 3.5 and 4.4 meters (11½ to 14½ feet).

In the central opening of the bridge there is a little loggia with a dedication stone which once read in Italian: “In 1333 the bridge fell down because of a storm, then after 10 years as the Comune wished, it was reconstructed with this ornamentation“.

Like it happened with the Basilica of the Holy Cross, also the Old Bridge was severely damaged in the 1966 flood of the Arno.

The shops on the Old Bridge and the origins of bankruptcy

The Old Bridge has always hosted a big variety of shops and merchants. After the authorization of the Bargello (a sort of police authority), they displayed their goods on tables before their premises.

The retrobotteghe (back shops) that are visible from upriver, were added in the seventeenth century. Legend says that the word and the economic concept of bankruptcy have their origins on the Old Bridge.

In the past it happened that if a money-changer was not able to pay his debts, the banco (table) on which he sold his wares, was physically rotto (broken) by soldiers.

This practice was cold bancorotto, which literally means “broken table”, so the merchant without his table was not able to sell anything and his activity failed.

The Vasari Corridor on the Old Bridge

In 1565 Cosimo de’ Medici the duke of Florence, in order to connect the Old Palace (Palazzo Vecchio – Florence’s town hall) with the Palazzo Pitti, commissioned to Giorgio Vasari the construction of a structure that ran also above the Old Bridge, it was called the “Vasari Corridor“.

Some years later in 1595 in order to enforce the prestige of the bridge, with a decree the authorities prohibited butchers (whose corporative association had monopolized the shops on the bridge since 1442) to work there and their place was immediately taken by several gold merchants.

Since our philosophy is to show you the non touristic part of Florence, the guides of the Free Tour Florence – Another Florence association, will be very happy to show you how can you reach the Old Bridge – one of the highlights of Florence – in the less crowded hours of the day.