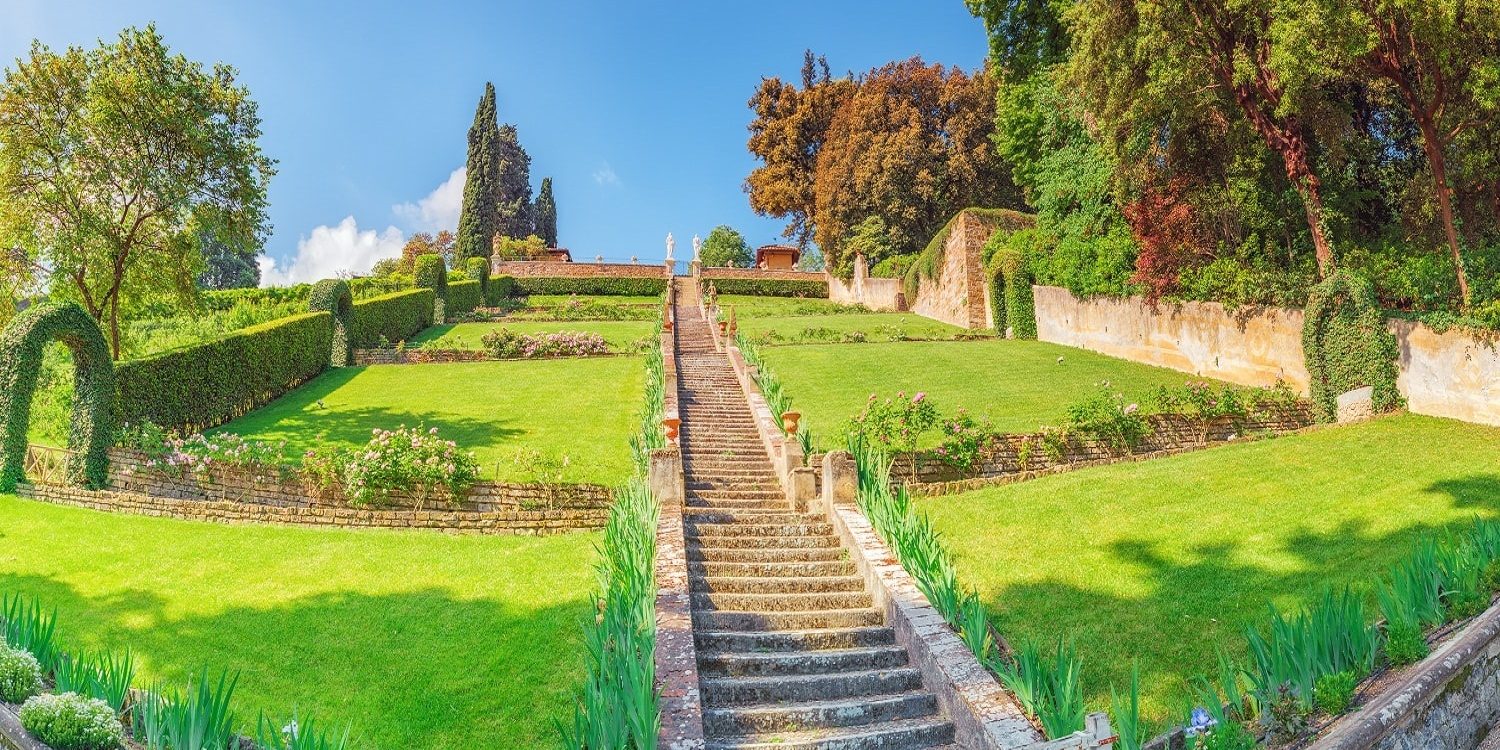 Florence is well known especially for its historic past, outstanding art collections and beautiful architecture but behind this façade there is another Florence, there is the Florence of the gardens and parks.

The most famous are for sure the Boboli Garden and the Botanical Garden in the city center, but far away from the crowds there is the Bardini Garden, surrounded by a magical silence and stunning architectures.

This 4 hectares garden – many times almost desert – has been restored recently and slowly rediscovered by locals and visitors. If you have already been to Florence or if you are interested in visiting the hidden gems of this beautiful city, the Bardini Garden is the perfect choice for you! In an hour you can visit the entire garden and we are sure that it will sooth your soul.

You will need to venture over the Oltrarno to find the two entrances of the Bardini Garden which is extended over a large hill area from the slopes of Piazzale Michelangelo up to the Arno, near the Ponte alle Grazie. In addition, a unique “green walk” connects this park with Forte Belvedere and the Boboli Gardens to Palazzo Pitti.

The origins The Bardini Garden

Originally the Bardini Garden was a fruit orchard, because we have to imagine that in the medieval ages a garden was mostly used for a practical reason rather than for a decorative one, and that it was only during the Renaissance that the word “garden” acquired the meaning it has today.

At the beginning this garden belonged to the Mozzi family as testified in a document from the 13th century, and it has been on property of the same family until 1880.

Over the centuries the Bardini Garden has been decorated with statues and flowers and at the beginning of the 19th century the Mozzi family also acquired the adjacent “Villa Manadora” with its beautiful park that was transformed by Giacomo Le Blanc into an English garden with woods, winding paths, statues, fountains and a small building for the Kaffeehaus.

After the death of the last descendant of the family, the garden was bought by Carolath Benten and it acquired a more “victorian” aspect. In 1913 the complex of Palazzo Mozzi, the Villa Manadora, the baroque and English garden, as well as some farmlands, were bought by the antiquarian Stefano Bardini, who realized a series of major renovations and changes.

He built an avenue to reach the villa and sacrificed the walled medieval gardens that still existed, this unfortunately brought to the loss of the medieval aspects, even if he was able to create an enchanting garden to explore.

After Stefano, the property of the Bardini Garden passed to his son Ugo but after his death in 1965, as there were no heirs, it was acquired by the city of Florence after a long bureaucratic process lasted over thirty years. Severely damaged by the long abandonment, the garden was thoroughly restored from the beginning of the 2000s.

The most interesting part remains the large baroque staircase that culminates with a scenic belvedere from which you can enjoy a spectacular view of the entire city.

After a massive restoration project, the Bardini Garden was reopened to the public, and here you can find camellias, roses, brightly colored azaleas, viburnums, irises and 60 varieties of hydrangea, next to garden with a wide collection of typically Tuscan fruit-trees.

Undoubtedly, the most scenic part of the garden remains the great Baroque staircase (built in the17th century) and the Wisteria Tunnel, both of which lead to the Kaffeehaus and restaurant with a panoramic terrace where you can enjoy a spectacular view of the city. The “Belvedere loggia” was a creation of Stefano Bardini who enlarged the two small Kaffeehaus buildings linking them using sandstone pillars from Pistoia.

At the top of the garden you will find the “Fontana del Drago”, together with an Anglo-Chinese garden with a canal running along the one side. The canal is one of the distinguishing characteristics of the Bardini Garden, because the presence of a canal is quite unique in the Florentine gardens.

The Bardini Garden was included by the European Garden Heritage Network (EGHN) in their selected gardens to visit in Europe.

The philosophy of Free Tour Florence – Another Florence association is to promote the concept of sustainable tourism, for this reasons our guides are able to give you some pieces of advice to find the hidden gems of Florence like the Bardini garden!