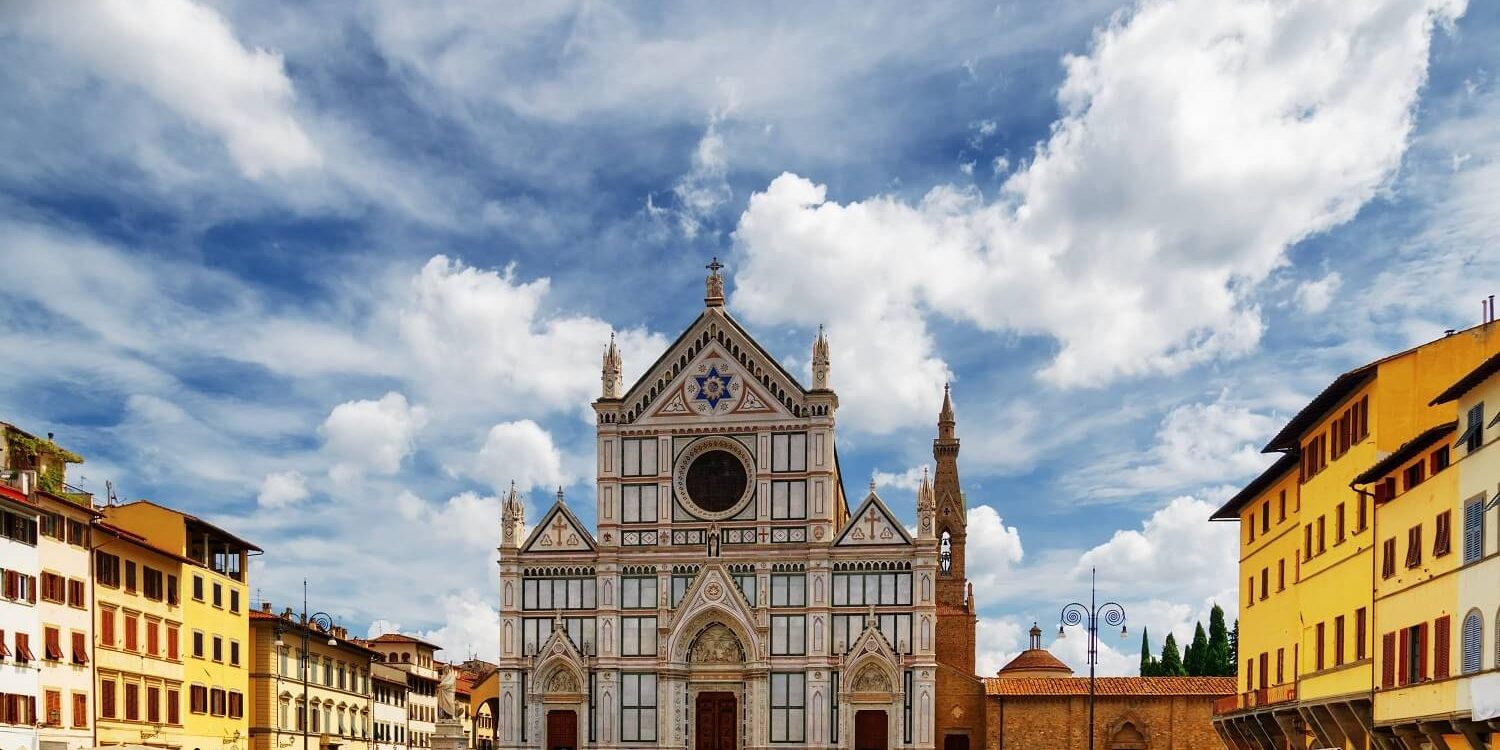 The Basilica of the Holy Cross, a franciscan masterpiece in Florence

Inside the of the Holy Cross are buried some of the most illustrious Italians: Michelangelo, Galileo, Machiavelli, the poet Foscolo, the composer Rossini… and for this reason it is known also as the “Temple of the Italian Glories”.

The Basilica of the Holy Cross

Legend says that the Basilica of the Holy Cross was founded by St Francis himself. The construction of the current church, that replaces an older building, was begun on 12 May 1294, possibly by Arnolfo di Cambio, thanks to the financial help of some of the city’s wealthiest families. Pope Eugene IV consecrated the Basilica of the Holy Cross in 1442.

The building’s design reflects the austere approach of the Franciscans. The floorplan is an Egyptian or Tau cross (one of the symbols of St Francis), 115 metres in length with a nave and two aisles separated by lines of octagonal columns. To the south of the church was a convent, some of whose buildings remain.

The Basilica of the Holy Cross is also very famous for its sixteen chapels, many of them decorated with frescoes by Giotto and his pupils, and its tombs and cenotaphs. Among the other artists who worked in the Basilica of Santa Croce we can find: Canova, Cimabue, Donatello, Agnolo e Taddeo Gaddi, Vasari, Veneziano and also the contemporary artist Henry Moore (he realized the statue of a warrrior).

In 1560, the choir screen was removed as part of changes arising from the Counter-Reformation and the interior of the Basilica of the Holy Cross rebuilt by Giorgio Vasari. As a result, there was damage to the church’s decoration and most of the altars previously located on the screen were lost.

The Primo Chiostro of the Basilica of the Holy Cross

The Primo Chiostro, the main cloister, was built by the architect Filippo Brunelleschi (who had designed and executed the dome of the Duomo) and completed in 1453. It houses the Cappella dei Pazzi (completed in the 1470s), commonly credited to Brunelleschi and considered one of the masterpieces of the Renaissance architecture.

In the Primo Chiostro of the Basilica of the Holy Cross stands also a monument to Florence Nightingale, to commemorate the English social reformer and statician in the city in which she was born and after which she was named. Today the refectory off the cloister houses the Museo dell’Opera di Santa Croce.

The façade of the Basilica of the Holy Cross

The neo-Gothic marble façade was realized between 1857 and 1863. It was designed by the Jewish architect Niccolo Matas from Ancona, who inserted a prominent Star of David into the composition. Matas had wanted to be buried with his peers but because he was Jewish, he was buried under the threshold and honored with an inscription.

In 1866, the complex became public property, as a part of government suppression of most religious houses, following the wars that gained Italian independence and unity. The bell tower of the Basilica di Santa Croce was built in 1842, replacing an earlier one damaged by lightning.

The Basilica of the Holy Cross today

In 1966, the Arno River flooded much of Florence, including the Basilica of the Holy Cross. The water entered the church bringing mud, pollution and heating oil. The damage to buildings and art treasures was severe, taking several decades to repair.

Today the former dormitory of the Franciscan friars houses the Scuola del Cuoio (Leather School). Visitors can watch as artisans craft purses, wallets, and other leather goods which are sold in the adjacent shop.

If you want to see the Basilica of Santa Croce join the our tours performed by the guides of the Free Tour Florence – Another Florence association!

The Church of Orsanmichele, an ancient grain market
20 Luglio 2018