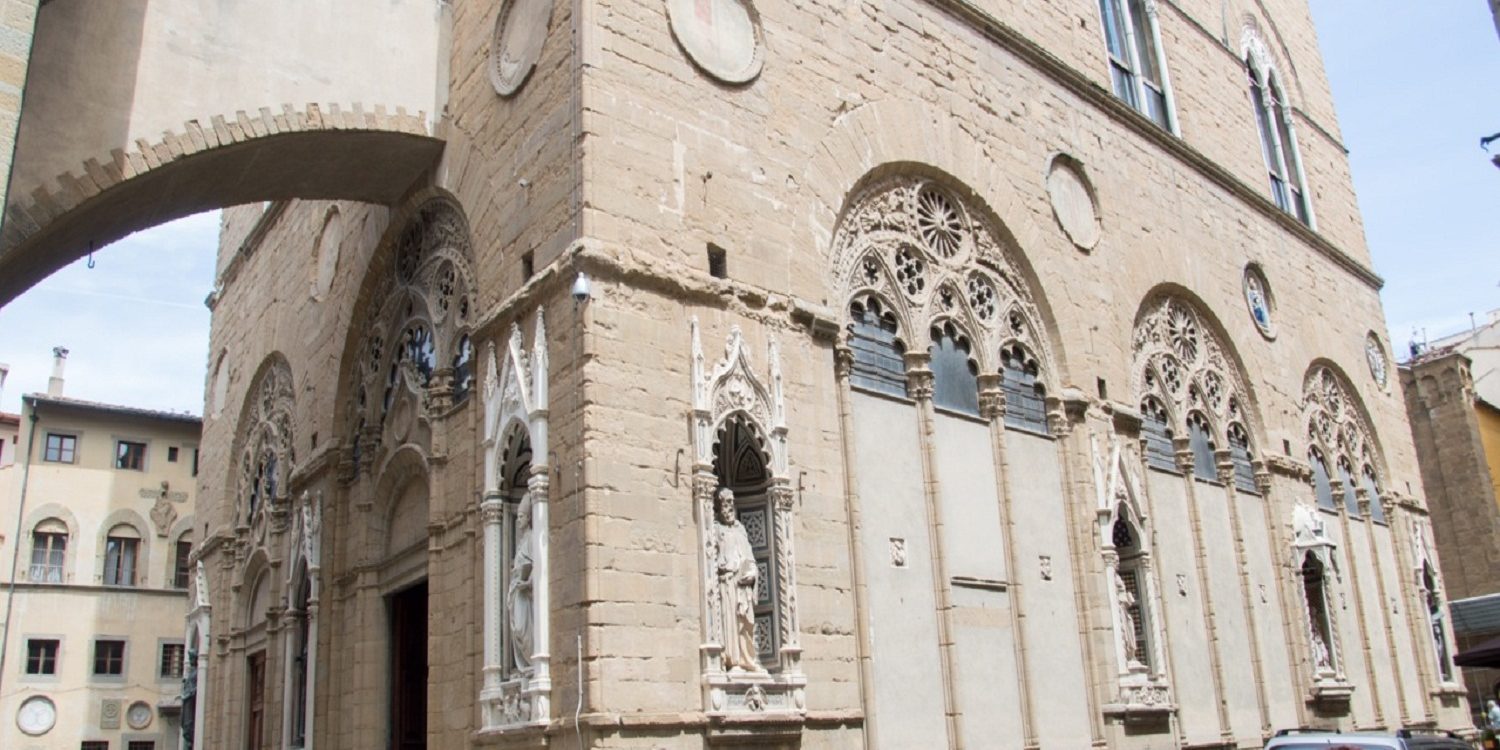 The Church of Orsanmichele, an ancient grain market

Located on the Via Calzaiuoli, the church of Orsanmichele takes its name from the contraction in Tuscan dialect of the word “Orsanmichele”, which literally means “Kitchen Garden of St. Michael”, and it comes from the fact that it was built in the same place of the kitchen garden that belonged to the ancient monastery of St. Michael, which no longer exist.

According to some sources, in Roman times here there was a building consecrated to the worship of Isis.

The history of the Church of Orsanmichele

The peculiarity of the church of Orsanmichele is that the area where it was built and the previous buildings have changed their functions over the centuries.

As already written earlier, some sources speculate that in the Roman times on this site there was a temple consecrated to Isis. In the 9th century the Lombard built here an oratory dedicated to St. Michael.

At the beginning of the 13th century by the order of the Commune, the ancient monastery became a market that worked probably under a wooden and brick awning built by Arnolfo di Cambio.

It was during this period that the first Madonna delle Grazie painting was done on one of the pillars of the structure and this was followed by the miraculous event of the appearance of the Madonna.

Around 1304 the building was destroyed by a fire and then reconstructed in 1337 with a more robust structure that was realized, according to Vasari, by the architects Benci di Cione, Francesco and Simone Talenti, Neri di Fioravante and probably Andrea Pisano.

Ten years later the artis Bernardo Daddi realized the Madonna and Child with Angels that replaced the Madonna delle Grazie destroyed by the fire of 1304.

After this they commissioned the construction of a tabernacle, still existing, made by the artist Andrea Orcagna in1359. Both the tabernacle and the painting are excellent examples of the aesthetics of the late medieval period.

The new building had an open loggia on the ground floor that was similar to the one built at the nearby Mercato Nuovo.

This new space was used as a market for the selling of wheat, while the upper part was designed to be used as the granary.

Still today in the church of Orsanmichele you can see two of the piers that were used to move the grain between floors; also the slots through which the grain passed are still visible.

The number of pilgrims who visited this site, despite Orsanmichele continued for some decades to function as a commercial area, increased after the story of the miraculous appearance of the Madonna; the increase took its peak especially in the times after the Black Plague of 1348.

In 24 years, between 1380 and 1404, the market was converted into a church, called the Church of Orsanmichele, that was used as the chapel of Florentine’s powerful trade and craft guilds.

The exterior of the Church of Orsanmichele and its statues

The exterior of the Church of Orsanmichele is possibly more interesting than the interior. The facades held 14 external niches that were filled with sculptures between 1399 and 1430. Indeed it was the city of Florence to ask the guilds to commission statues of their patron saints in order to embellish the facades of the church.

The three richest guilds realized their statues of bronze, that at that time costed roughly ten times the amount of stone.

The 14 statues outside the Church of Orsanmichele represent the patron saints who protect the different guilds, that were: the Doctors and Apothecaries (Medici e Speziali), the Wood and Stone Workers (Maestri di Pietra e Legname), the Linen-weavers and Peddlers (Arte dei Linaiuoli e Rigattieri), the Shoemakers (Arte dei Calzaiuoli), the Merchants (Mercanti).

The Church of Orsanmichele today

Nowadays the sculptures on the facades of the Church of Orsanmichele are copies, because the originals have been moved to different Florentine museums in order to protect them from the elements and vandalism.

Join one of the tours led by the guides of the Free Tour Florence – Another Florence associations, and you will be able to admire the beautiful Church of Orsanmichele, one of the stops of the tour!