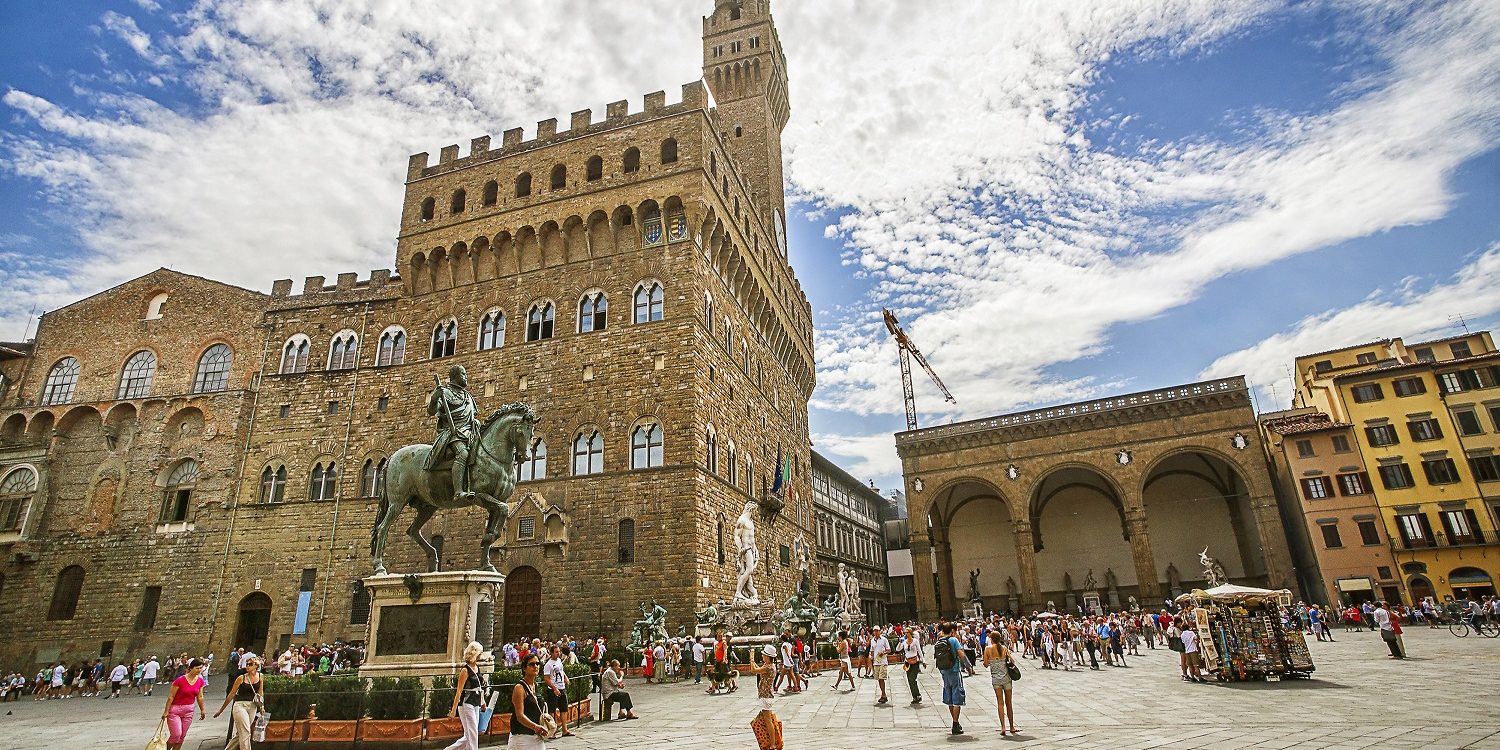 The Old Palace, the town hall of Florence

At its origins the Old Palace was called “Palazzo della Signoria” due to the name of the ruling body of the Republic of Florence, the Signoria of Florence.

Over the centuries it was also given several other names such as: Palazzo Ducale, Palazzo del Popolo or Palazzo dei Priori. The name Old Palace was acquired when the Medici’s duke residence was moved to Palazzo Pitti.

The history of the Old Palace

The Old Palace was designed by the architect Arnolfo di Cambio who worked at the Florence Cathedral and according to Vasari’s “The Lives of the Most Excellent Painters, Sculptors, and Architects”, also at the Basilica of the Holy Cross.

In 1299 the people of Florence decided to build a palace that represented the city’s importance as well as a secure building that was easy to defend in case of riots or turbulences.

The construction of the Old Palace began upon the ruins of two palaces that belonged to the Uberti family: the Palazzo dei Fanti and the Palazzo dell’Esecutore di Giustizia.

This choice wasn’t casual: the members of the Uberti family were considered “rebels” and by building a new palace upon the ruins of their possessions had an important meaning for the Florentine: their home would never be rebuilt on the same location.

In May 1540 the duke Cosimo I de’ Medici moved the official seat of the Signoria from the Medici palazzo to the Old Palace, which acquired this name when he removed the seat once again to Palazzo Pitti.

In order to connect the two buildings, the duke commissioned to Giorgio Vasari to build an above-ground walkway, the so called “Vasari corridor”, that links the Old Palace with Palazzo Pitti, through the Uffizi and the Ponte Vecchio.

From 1865 to 1871 the Old Palace gained new importance as the seat of the united Italy’s provisional government, when Florence was the temporary capital of the new Kingdom of Italy.

The Old Palace remains the symbol and center of local government: since 1872 it has housed the office of the mayor of Florence and is the seat of the City Council.

The architecture of the Old Palace and its clock tower

The Old Palace is a cubical building made of solid rusticated stonework. It has two rows of two-lighted Gothic windows with a trefoil arch.

The artist Michelozzo Michelozzi in the 15th century added some bas-reliefs representing the Florentine lily and a cross in the spandrels between the trefoils.

On top of the Old Palace there is a crown made of projecting crenellated battlement, supported by corbels and small arches. Under these arches there are 9 painted coats of arms of the Florentine Republic that are repeated in series.

Some of the arches were used as embrasures fro dropping rocks or heated liquids on invaders.

The Old Palace is enhanced by the tower (height 94m) with its clock, and according to some documents the architect Arnolfo di Cambio incorporated the ancient tower of the Foraboschi family into the new tower’s façade.

This is the reason why the tower is not directly centred in the building. The clock was originally constructed in 1353 by the Florentine artist Nicolò Bernardo, but in 1667 it was replaced by a replica made by the German Georg Lederle.

In the tower of the Old Palace there are two small cells that imprisoned two important men: in 1435 Cosimo de’ Medici (the Elder), the first member of the Medici political dynasty, and in 1498 Girolamo Savonarola, the Dominican friar who was executed in front of the Old Palace.

At the entrance of the Old Palace there is a copy of the Michelangelo’s David, considered one of the masterpieces of the Renaissance.

The original stood there from 1504 to 1873 when it was moved to the Accademia Gallery. The replica was realized in 1910 and is flanked by Baccio Bandinelli’s Hercules and Cacus.

By joining one of the tours offered by the Free Tour Florence – Another Florence association, you will be able to admire the stunning Florence’s town hall, the Old Palace.

The Basilica of the Holy Trinity, a variety of architecture styles over the centuries
13 Luglio 2018